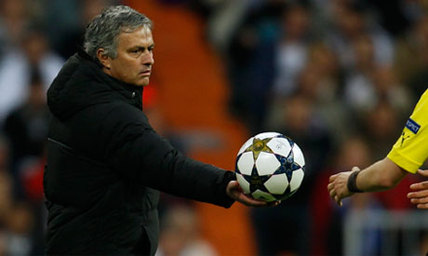 Mourinho says that some people hate him in Spain, but in England they treat him fairly


Real Madrid coach Jose Mourinho dropped another hint he was considering his future by saying he might not be with the Spanish giants next season after they lost in the Champions League semi-finals on Tuesday.


Following Real's 4-3 aggregate defeat by Borussia Dortmund, the former Chelsea manager was asked if he would remain in Madrid next term and he told ITV Sport: "Maybe not. I don't know but I want to be where people love me to be."

Real came within a whisker of pulling off a remarkable comeback after losing their semi-final first leg 4-1 away to Dortmund last week but came up just short with a 2-0 win at the Bernabeu to go out of the competition.

A third exit in succession at the last-four stage prompted further questions on Mourinho's future at Real.

The former boss of Porto and Inter Milan, who won the Champions League with both clubs, has been surrounded by rumours he might leave Madrid after this campaign with England his most likely destination despite having a contract until 2016.

"I know I am loved in England, I am loved by the fans and the media," Mourinho told a news conference.

"They treat me fairly. They give me credit when it is due and criticise when it is deserved.

"I am loved by some clubs, especially one," he added referring to Chelsea. "In Spain it is different, some people hate me, many of you in this room.

"It is a difficult decision. I like the club (Real) the president, we have a good team. I need to be honest and fair.

"We will sit down and talk at the end of the season."